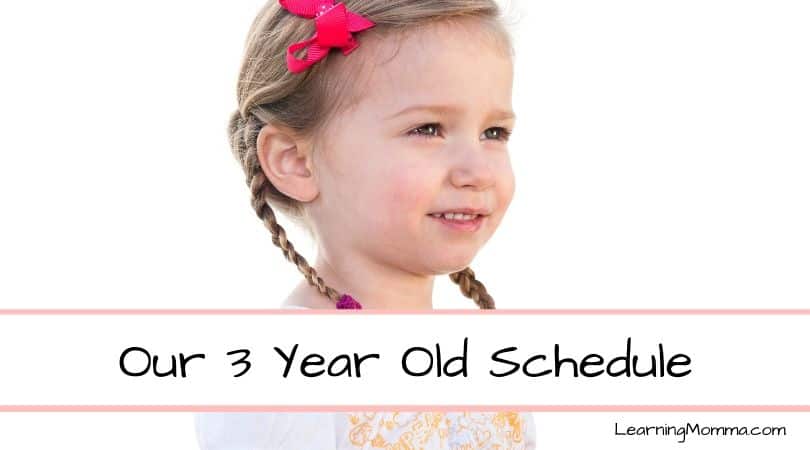 Figuring out a 3 year old sleep schedule, satisfying their growing appetites, and filling their days with engaging activities can be a challenge! 3 year olds are in a lot of transition. They may be starting to outgrow the need for a daily nap and many begin to crave structured activities to engage their growing capacity to learn throughout the day. Some 3 year olds also begin to participate in preschool. It’s a tough age to navigate a daily routine with, but finding a consistent rhythm can provide really helpful stability to a 3 year old’s world.

Shortly after our daughter turned 3 she began to really struggle to fall asleep at night. She started to come out of her room multiple times for petty reasons hours after bedtime and we couldn’t figure out what to do about it. She also began struggling to remain quiet and in her room at nap times.

I had forgotten that my growing daughter needed a daily routine that grew with her!

I finally realized that perhaps the problem with our daughter’s previously good sleep patterns was that she genuinely wasn’t tired at bedtimes or naptimes. Therefore, we made a few adjustments to shorten her nap times – and it fixed both problems within days! She needed less sleep in her daily routine and, even though I missed the longer naps, we both needed a routine that fit her needs to keep us sane.

I’ve found that learning from what other moms have done with their children at different points as they grow has been extremely helpful to me as our family grows. Therefore, as our daughter is just weeks away from turning 4, I’m looking back at the last year and want to share with you a breakdown of her 3 year old daily routine. The breakdown includes details about her adjusted and shortened nap times, explanation about activities that we did on a weekly basis, and some notes about snack and meal times.

Every child has different needs, interests, and appetites. This is simply what worked for us and our daughter! It’s my hope that sharing the information about our days helps to give you a benchmark and some ideas as you build a routine that works for you and your child. There is no one cookie-cutter structure that is best!

Our Daily Schedule For A 3 Year Old Toddler

We use a toddler sleep training clock to help our daughter remain quiet in her room until 7:30 each morning, so she usually comes out of her room to start the day right at 7:3am. (You can read more about the clock we use and how it works in my post about dealing with a toddler waking early.) After waking I usually have to prompt her to go potty and then she puts on clean underwear or a pull-up and clothes. (By about halfway through her 3rd year she started picking out her own clothes!)

It usually takes me a bit to get up and going even after our 3 year old wakes each morning, so she often plays quietly in my room until I get going for the day and we have breakfast. She typically eats cereal with milk for breakfast and I give her a vitamin gummy and some water.

Recent world events have changed morning activity time for our daughter dramatically, but before many things shut down we followed a rotation of visiting the gym, library, or grocery store each morning during this block of time. Since things shut down in the second half of her 3rd year I tried to come up with constructive activities to keep her busy in the mornings without being out. You can read more details about some of the activities we did to keep busy in my post about stay at home activities for toddlers.

For lunch, our 3 year old typically eats a peanut butter and honey sandwich, yogurt or banana, and water or juice.

After lunch, our 3 year old usually plays independently or sometimes has tv time until her little sister’s nap time begins at 1pm.

Until she reached just over 3 years old our daughter went down to nap at 1pm. However, she began to have trouble falling asleep at night and began to fight going down for her naps at this time. We realized that she needed to make a shift in her nap schedule that reduced her daily nap time so that she would be tired enough to go down at bedtime and tired enough not to fight going down for her naps. I experimented with cutting out her naps altogether, but just a few days of doing so led to major meltdowns in the evenings that proved she wasn’t ready to completely give up the daytime sleep.

We found a solution by moving our daughter’s naptime later and allowing her to take books to each nap. She began to go down to nap closer to 2pm instead of her previous 1pm.

Since our 3 year old’s younger sister began her nap at 1pm, the hour between younger sister’s nap and her own was an hour for quiet play or one-on-one activity with mommy. If another family member was home the two of us would go for a walk. If no one else was home and we had to stay at the house she would often spend time coloring, playing with toys in her room quietly, or we would read books together.

As I mentioned above, our daughter’s 3rd year was one of a lot of transition in her nap routine. Because she was no longer in need of as much nap as previously and often fought naps altogether, we pushed her nap start time to 2pm. We also started to allow her to sit in her bed with books during each nap. Taking books allowed her to remain awake but still get some decompression time if she wasn’t tired enough to sleep. While some days she would read through the whole nap time and not sleep at all, most days she still ended up dosing off and getting some sleep. Since she thought of it as reading time she didn’t fight going to her nap anymore and the quiet environment while sitting in her bed often still led her to sleep. It was a win-win!

(We also used a toddler sleep training clock to help her know exactly when her nap time could be over each day. You can read more about how we implemented that and which one we used here.)

(It was not uncommon either that she would fall asleep toward the end of her nap and actually end up sleeping until 4-4:30pm which made this activity time really short. I usually woke her by 4:30 if she was still napping so that she would still be tired enough to fall asleep at bedtime.)

We usually ate dinner sometime between 5-5:30. Our 3 year old simply ate whatever I was making for the whole family unless I knew that it was definitely going to be too much of a struggle for her to eat. On those days I would offer a more kid-friendly alternative.

The time after dinner and up until bedtime was time for both girls to enjoy their Daddy. They would often play outside with him, play a game, swim in their blow-up pool under his supervision, take a walk with him, or just romp around the living room with Daddy.

While 7pm was the goal, our bedtime routine for 3 year old little miss was often a lengthy process. She would go potty on her own and put on a clean pull-up for overnight and brush her teeth. Daddy then typically read her the next story from her children’s Bible, sang a song with her, and tucked her in for the night. She liked to find any excuse to lengthen the bedtime process and Daddy treasured the time with her after being away most of the day – so our daughter sometimes didn’t actually end up in her bed ready to sleep until 7:30-7:45pm. There were also occasions where we were out for the evening and she wouldn’t get down until much later. In general however, 7pm was the bedtime that we aimed for with her.

She typically slept through the night without a problem.

Note: Our daughter was potty trained by 3 years old. However, I did still keep a pull-up on her at nap times and over nights. Some mornings her pull-up would still be dry but some mornings it was quite wet. I did not enforce having her get up to use the potty overnight or during naps since it saved my sanity to keep her sleep uninterrupted and just change a wet pull-up when she woke!

There’s no cookie-cutter schedule that works for every 3-year-old, but if you’re working on developing your own toddler routine it is my hope that reading the details of our daily schedule helps you! I personally enjoyed the growing independence of our daughter throughout her 3rd year. However, I did find the reduced napping time in her schedule to be more draining on me as a mother. She also hit the “why” stage in full force during her 3rd year as she really began to process the world around her. In general, the above routine seemed to meet the needs of our daughter well and kept us all sane through her growing third year.

Best wishes as you work out your 3 year old’s day and if you’re struggling to come up with structured activities to fill their routine with, make sure you also check out my post on cheap and easy at home activities to do with your toddlers!