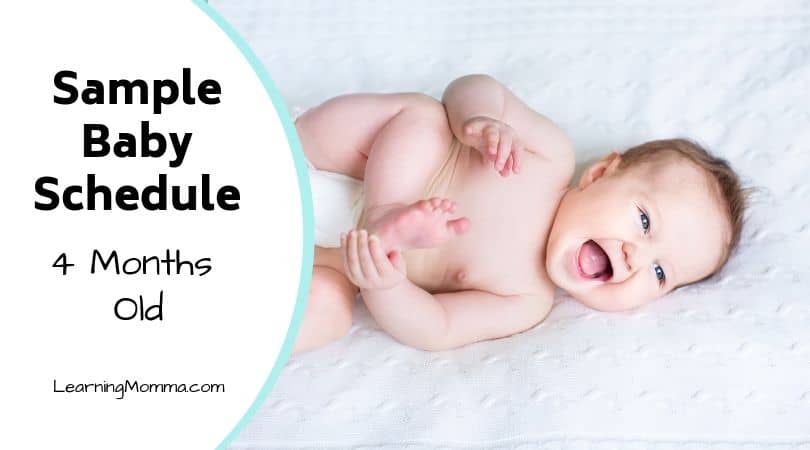 Our daughter’s 4 month old schedule wasn’t a whole lot different from her 3 month old schedule, so I hesitated posting it separately. However, we did start her on solid foods at 4 months (per our pediatrician’s instruction) so I decided to post this on its own with some of those changes noted.

(Note: This post contains affiliate links which means if you purchase a product through one of my links I earn a commission on your purchase – at no additional expense to you! Read the full disclosure here.)

Our second daughter was fully on the bottle by 4 months old with about 2 bottles a day of frozen pumped milk and the rest of the bottles formula. All of the bottles were 6 oz. However, she began to have an excessive spit up problem and I realized into her fifth month that some of the reason was because I was overfeeding her! I then reduced the bottles that coincided with her solid feedings to 4 oz. each instead of 6 and it seemed to help. (At that time I also increased her other bottles to 8 oz. and moved her to a 4 hour feeding schedule – more on that in her 5 month schedule.)

I’m sure every baby is different with the amount of food that they need. Our daughter was a big baby (in the 93rd weight percentile) with a BIG appetite. Follow your pediatrician’s advice as to how much to feed if you are using bottles and/or how often to feed if you are nursing.

8:00am – Play Time (see notes below on some of the activities that she enjoyed)

5:00-6:00pm – Play Time & Solid Food Feeding (I gave her fruit or veggie purees during this feeding. I started with each of the veggies – giving them each consistently to her for 3 days before moving to the next to gauge any allergic reactions. After cycling through the primary veggies we moved to some fruits.)

6:00-6:45/7:00pm – Cat Nap (This nap was never consistent. Some days it would seem that she wanted to sleep all evening and some days I would say it was as short as 30-40 min or so. We pretty much just let her go as long as she wanted each evening and if she slept super long we would wake her for her last bedtime bottle at 7:30pm.)

Nap times were in general still very inconsistent during our daughter’s 4 month old schedule. She would sometimes sleep the whole nap and I would have to wake her for the next feeding or she would sometimes wake a frustrating 40 minutes into the nap at the transition in her sleep cycle. Most of the time she would not resettle if she woke early so I would just aim to put her back down 90 minutes from the time she woke and hope for a longer next nap. I did this to avoid letting her get overtired and to facilitate her still getting the amount of sleep into the day that she needed. Usually It did not interfere with feeding times to do this. It just meant less wake time post-feeding sometimes and more wake time before the feeding.

Our daughter did go down well for sleeping times during this month since she was able to start sleeping on her belly (she began rolling at 3 1/2 months so we stopped swaddling and allowed her to sleep belly or back) and she found her thumb. Neither of our daughters took pacifiers so it was a game-changer for their ability to self-soothe when they found their thumbs. Our second daughter did this just before 4 months and it really helped her to go down easy for naps and sleep relatively well overnight going into her 4 month old schedule.

As I mentioned above we also started our daughter on solid foods during this month. We initially introduced just the purees in the evening, but she was still having trouble sleeping through the night so we added in an afternoon oatmeal feeding. As soon as we added this she made it through the night. Our pediatrician gave us the go-ahead to introduce solids twice a day at her age because she was sometimes gulping down over 9 ounces from the bottle at one feeding and then still taking another 6 ounce or more bottle three hours later. It’s probably not typical to need solids twice a day at this age (our first daughter didn’t) but our second daughter just had a huge appetite. Every child has different needs so ask your pediatrician what they recommend!

Our second daughter was pretty easy to entertain as a young baby since she was generally content to just sit in a baby seat and watch her toddler sister tear apart the house. During her 4 month old schedule she began to really enjoy playing in her door bouncer (the kind that hooks onto a door frame and lets them bounce up and down), spending some time in an exersaucer (she didn’t stay content in this one for very long though), or just mouthing some crinkle toys while sitting in her seat and watching the toddler chaos around her.

(For some fun activity ideas and ways to engage with your baby each month throughout their first year, read this resource from BabyCenter)

In general, our second daughter’s fourth month was an uneventful one and she stayed pretty content on her schedule. She had relatively no new physical milestones that interrupted her ability to sleep and the introduction of solid foods gave her a full and happy belly to begin consistently sleeping 12 hours through the night.

There’s no cookie cutter for babies when it comes to schedules, but if you are attempting to build a 4 month old schedule for a little one that’s in your care I hope you found this post helpful!