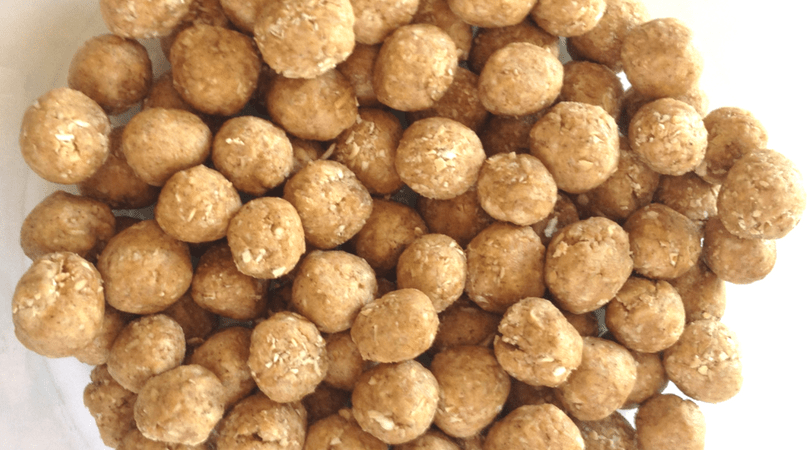 Feeding a toddler can be a difficult task! Fickle little ones can refuse to eat most of the main food groups or decide they will only eat certain textures of one. If you are trying to keep a toddler nourished while keeping up with their ever-changing food opinions, you might need a new recipe to throw into the mix – especially a relatively healthy one!

Once we introduced finger foods to our now one year old daughter she became an independent and often picky eater. Unless the menu was pizza, pasta, cheerios, or cheese, getting her to eat was sometimes a stressful battle. I wanted to get some healthier options into her, but it was difficult to try to feed her any kind of oatmeal or cereal without her grabbing for the spoon or toppling the bowl, and getting her to eat protein of any kind was an even more difficult task.

To make all of our lives a little bit easier, I decided to get creative with a recipe to tie in some of the food items I wanted our toddler to eat more of. I came up with a toddler version of energy bites (toddler oatmeal bites) to allow our daughter to self feed the grains and protein that I was struggling to get her to eat.

These no-bake toddler oatmeal bites are only four simple ingredients and super easy to make! Our young toddler has been happily eating them for lunch the last couple of days. They aren’t extremely sweet or flavorful, but I tried a few myself and have to say they aren’t too bad. Including honey in the toddler oatmeal bites would sweeten them up, but I avoided it since our doctor said it was a taboo ingredient for children under the age of one and I wanted the recipe to suit early finger-feeders as well.

(This post contains affiliate links which means if you purchase an item through my link I make a commission on the purchase – at no additional expense to you! Read the full disclosure here.)

These oatmeal bites really do require only 4 easy ingredients that you probably already have on hand! For the oatmeal you can also use baby cereal instead – a great way to use it up if your little one has outgrown an appetite for it.

Here are the simple steps:

I blended 1 1/4 cups of oats for the toddler oatmeal bites in the blender until they were more of an oat flour consistency and dumped it into a bowl. (You can skip the blending if you are using baby oatmeal cereal.) After adding the oatmeal (or cereal) to the bowl, I added the peanut butter, yogurt, and cinnamon, and mixed! 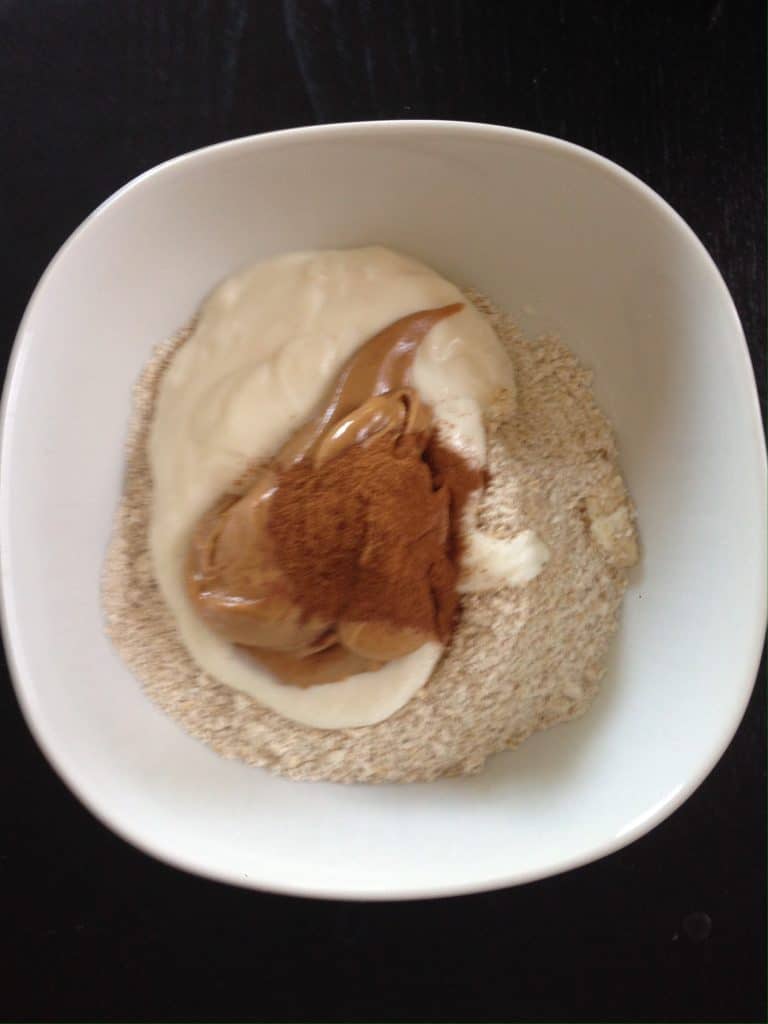 To make the toddler oatmeal bites a little bit sweeter you could use flavored baby oatmeal (which as I mentioned would also eliminate the need to blend the oats), but to keep it cheap and simple I just used rolled oats that I had in the pantry and blended them.

A Super Easy Fix For The Toddler Waking Early

After mixing all of the ingredients together the consistency was a little bit stickier than I wanted to be able to roll the mixture into balls, so I blended a few more oats and dumped them on top until it was a roll-able thickness and didn’t stick to my fingers right away. 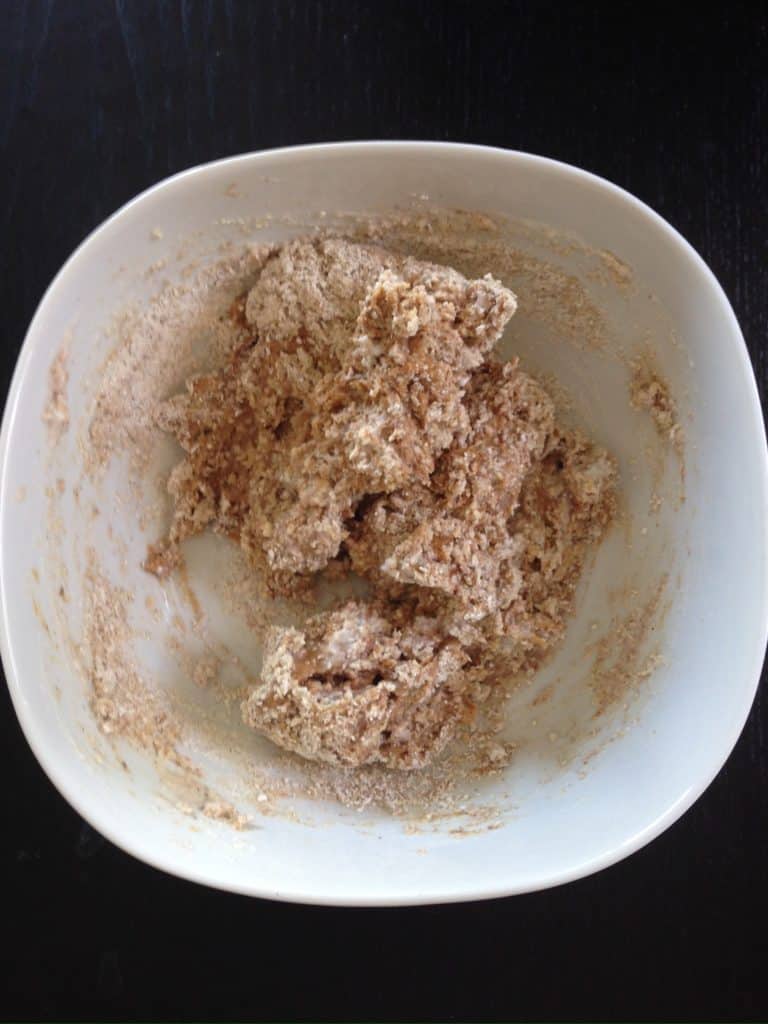 Next, all I did was roll the mixture into tiny toddler-sized balls to create toddler oatmeal bites! I tried to keep them about the size of a small grape (or a little bit bigger than a piece of KIX cereal).

UPDATE: A reader had a great idea in the comments to smash each of the toddler oatmeal bites after rolling to prevent a choking hazard. My little one never had any choking problem with these, but with the size and shape of this consumable for toddlers it can be an issue. To reduce any risk of choking, just smash each one after rolling or before serving to your toddler! 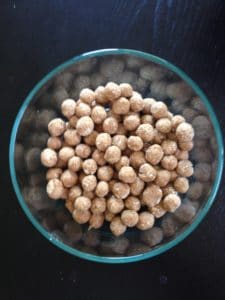 And that’s it! The oatmeal bites are ready to be enjoyed or thrown across the room (whichever activity your toddler enjoys more at meal time). 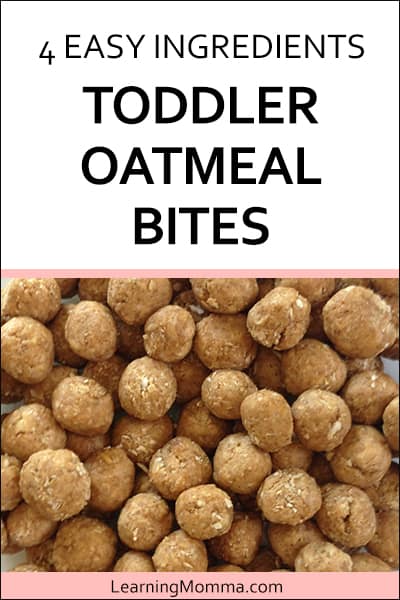 When we first introduced these toddler oatmeal bites to our daughter she squished them between her fingers a few times before finally deciding to eat them, but they have been a helpful and relatively low mess addition to her lunch for the last few days now!

I hope these easy toddler oatmeal bites are also helpful to you in your attempt to keep your toddler well fed!

If your toddler loves these no-bake oatmeal bites, make sure you also check out my super simple hidden veggie toddler smoothie recipe.