4 Simple Tips For Switching From Breastmilk To Formula 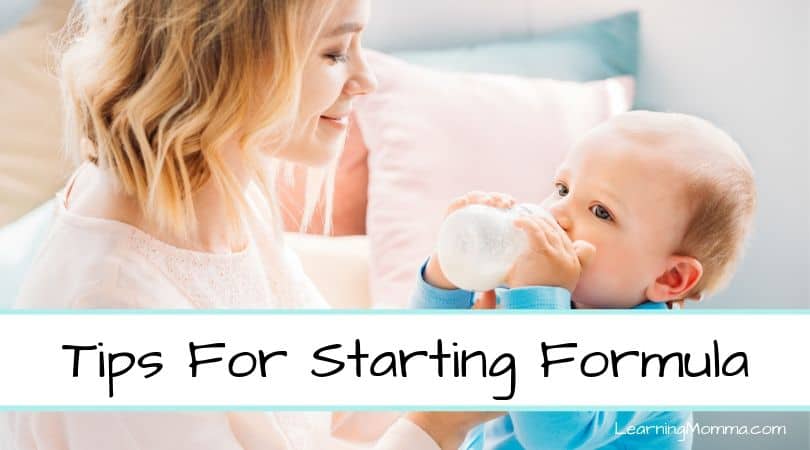 Tips To Make Switching Baby From Breastmilk To Formula Seamless

Are you a breastfeeding momma looking to make the switch to formula? Or are you about to begin combination feeding breastmilk and formula? Keeping a few simple tips in mind can make the process of transitioning from breastmilk to formula much easier.

I breastfed both of my daughters for a period of time before transitioning to formula. I didn’t research anything about how to switch from breastmilk to formula when I began to do so with my first daughter. Reading up a little bit may have prevented some fussy days during the adjustment period. It is my hope that learning from my experience with each daughter might help you if you are wondering how to switch to formula.

I nursed my first daughter until she was about 7 months old at which point I gradually began switching from breastfeeding to formula over the course of a month. She was fully weaned to formula by 8 months old. While I didn’t stop nursing her until 8 months old I had difficulty with my milk supply in her first several months and supplemented with formula during those months when it was necessary – so she had some formula mixed into her breastfed diet in her very early months and then began to be more fully on formula at 7 months old.

My second daughter was exclusively breastfed until close to 4 months old when I began to make the switch to formula with her. She did not have any formula in her diet until at least 3 months old when I slowly began introducing it and by 3 1/2 months or so she had higher amounts of it as I began the process of fully transitioning her.

Each of my daughters had some things that they responded to differently when it came to the transition to formula. They also had some common difficulties. Through my experience with each of them I’ve compiled a list of 4 simple tips to make the transition from breastmilk to formula easier.

Switching From Breastmilk To Formula:

1. Watch out for signs of pain/constipation.

This is probably my number one word of advice when it comes to how to transition from breastmilk to formula. It’s something I did not even think about when I first introduced formula to my oldest daughter. Both of my girls had periods of suffering from constipation and tummy pain when we began switching from breastmilk to formula. My first daughter had pain even when I was only using formula to supplement her breastfed diet. Their bodies simply weren’t used to digesting it.

However, using the right type of formula solved this problem for both of them!

With my oldest daughter I started to supplement her with just regular Similac and Enfamil formula. (This was probably around 2 months old.) She began to get really fussy (like she was in pain) after a day or two and I realized that she hadn’t pooped in several days. This was very abnormal for her as she usually had at least one poop each day. Sure enough, when I switched her formula to a more gentle type she became a happy pooping baby again! For her the magic formula was Similac For Supplementation.

My second daughter did not share the same magic formula. After dealing with formula constipation with our first daughter, I went right to Similac For Supplementation with our second daughter when we began switching from breastmilk to formula. She actually did okay on it for several weeks until she started showing similar signs of pain, constipation, and fussiness. We tried a few other types of formula for her until she seemed to respond well to Enfamil Gentlease. She has now been on the Enfamil Gentlease for three months without any further discomfort.

There is no one best formula for breastfed babies. Even my two daughters did not respond well to the same type. It may take a little bit of trial and error to land on which formula is best, but if your baby begins to show signs of constipation pain soon after switching from breastmilk to formula then I highly recommend trying a different formula. This was key to my babies’ happiness on formula.

With both of my daughters this kind of naturally happened in the process of switching to formula, but babies’ tummies may adjust to the switch to formula better if they can be eased into it. The digestion of breastmilk and formula is different, so giving babies a gradual introduction can help their bodies to adjust and avoid digestive complications. My pediatrician actually advised me to make half of each feeding breastmilk and half of each feeding formula when I first began switching my second daughter. This was too cumbersome for me to do at each feeding, but I still followed a process of gradual introduction.

When I began switching from breastmilk to formula with my second daughter, I started by beginning to exclusively pump. I did this because she had been refusing the bottle for a month and I didn’t want to risk her refusing it again. When she finally began to take a bottle (the last one that we tried!) I was already ready to switch to formula. Therefore, I decided to just make each of her feedings pumped milk in a bottle until she was fully on formula. When I began to actively transition her to formula I replaced one of her bottles of pumped milk with a formula bottle each day. I did this for about a week before switching another bottle to formula, etc., etc., etc. (Switching one feeding at a time every week is also a really helpful way to gradually help your body adjust and diminish milk supply!)

With my first daughter I also switched one feeding at a time from breastmilk to formula. However, with her I continued to nurse each feeding until it switched to her cup of formula. I think because she was drinking from a cup and doing it at least once a day, it didn’t seem to create any issues or confusion for her to nurse through the weaning process.

However you choose to go about it, your baby’s digestion will probably benefit from making the switch to formula slowly so that they have time to adjust instead of shocking their system.

If your baby is already taking a bottle, then this tip is likely not important. However, if your baby has never taken a bottle be sure to start with a slow flow nipple!

Our first daughter took a bottle in her first 3 months which I used to supplement with formula when needed. However, from 3 months on she refused to take a bottle again. I ended up getting her to take her formula from a straw cup at 7 months old before I was able to begin the process of weaning her. You can read more about our experience with her bottle refusal here.

Our second daughter took a bottle in her first 2 months which I used weekly to feed her pumped milk so that I could be sure she would take the bottle if I needed to be away. Despite my efforts, by the end of her second month she also began refusing the bottle until I found ONE TYPE that she magically took to. You can read more about my experience with her bottle refusal and my review of 8 top bottles for breastfed babies here.

I give all of that background to say that it is not always a given that your breastfed baby will even take a bottle. However, if they are accepting a bottle, breastfed babies seem to do much better with a slow flow nipple when you begin the transition to formula. Stronger nipple flows on bottles are just not as similar to the flow a baby receives when breastfeeding and can make them gag and scream through the feeding process.

My favorite type of bottle for a breastfed baby (the ONLY type my second daughter would take) is the NUK Simply Natural Bottle. They come in all different colors and sizes.

4. Warming the formula may be very important.

When it comes to how to transition from breastfeeding to formula, warming the formula MAY be important to your baby’s acceptance of it. For my second daughter I absolutely had to warm her formula bottles or she would just cry and clamp her mouth shut and would not take them. With my oldest daughter I always gave her formula at room temperature or even right out of the refrigerator, so this was an adjustment for me. My advice would be to offer formula cold or room temperature at least once to see if your baby will take it. If they do then keep it that way! It is much easier to manage formula feeding without needing to always warm the bottle.

If your baby needs to have their bottles warm to accept them it’s not too much extra work when you are at home. I know that our tap water is safe so I just use warm tap water to make bottles at home. On occasion I also microwave them if they’ve gotten cold or I had them in the fridge for some reason.

Making a warm bottle on the go can be a more difficult task, especially if I know we are going to be out for the day somewhere without access to warm water or a microwave. At one point I researched all kinds of bottle warming solutions on Amazon, but they all required a lot of work or expense. Some had a whole process of boiling the heat pack between each use, etc. I gave up on fancy solutions and found a cheap and easy way that has worked exceptionally well for us!

If you need to make a warm formula bottle on the go, just take along warm/hot water in a steel water bottle!

These work great at keeping the water warm and then all you have to do is pour it in the bottle and mix the formula in. We’ve even been away all day and my thermos has kept the water warm without a problem. 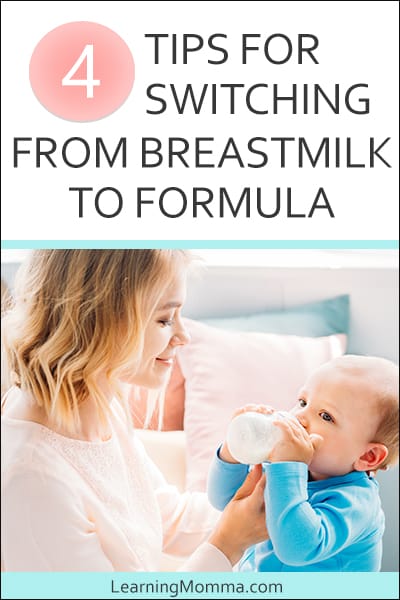 If you have been questioning how to transition from breastfeeding to formula, I hope these simple tips were helpful to you! It wasn’t a complicated adjustment for us with either of our girls, but we did have a few hiccups along the way that could have been avoided with some of these tips.

If you are a mom who has been there/done that, what are some of your tips for switching from breastmilk to formula?