My Baby Refuses To Take A Bottle – A Tip To Keep Them Fed! 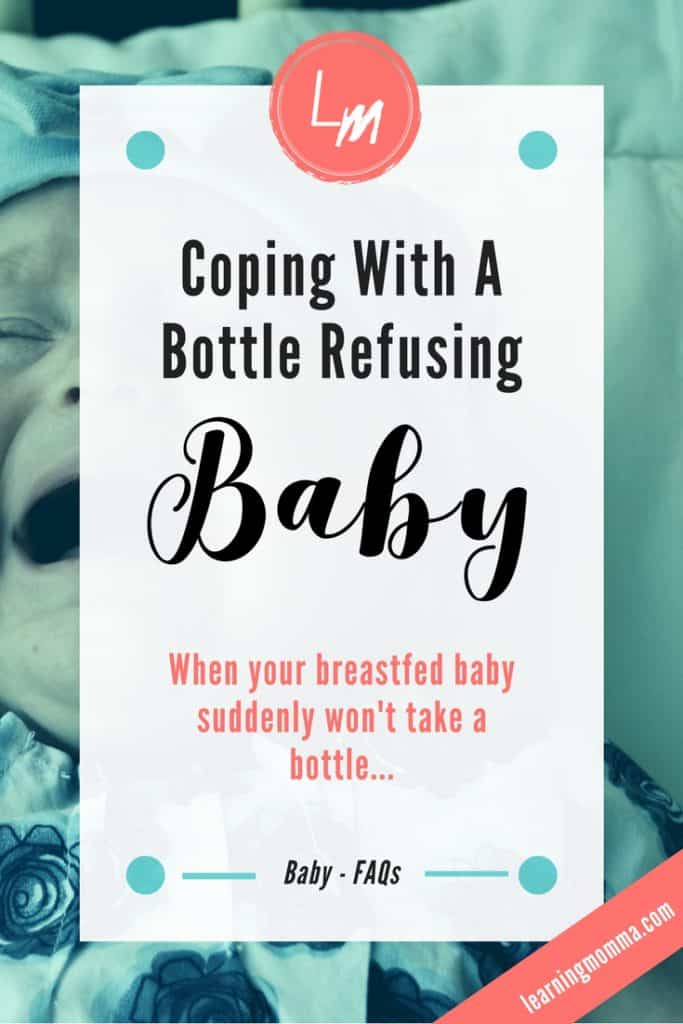 “Help! My baby refuses to take a bottle!” You say.

It’s an extremely difficult thing when your breastfed baby refuses to take a bottle. You are unable to supplement if needed, you’re unable to have any help with overnight feedings, and you are attached at the hip to your baby to ensure that they remain nourished.

I remember trying to get my hair done when our daughter Ellie was about 4 months old. I was looking forward to having some “me time” and getting out of the house for a bit. However, in the middle of my appointment I started to receive frantic texts from my husband. He was worried because Ellie was refusing to take her bottle or eat. So, instead of relaxing for my time of personal pampering, I rushed home with a wet head to a stressed out husband and very hungry little girl – because I am a mom who knows what it’s like when my baby refuses to take a bottle.

I had heard other mothers crying the “my baby refuses to take a bottle” cry, but gave it very little thought in the early months of Ellie’s life. I breastfed her but often supplemented with a bottle of pumped milk or formula due to frequent supply issues in the first couple months.

However, around 3 months of age a friend supplied me with lactation supplements that really boosted my supply and for about a month Ellie didn’t have need for a bottle. When my hair appointment rolled around at about the 4 month mark, I went assuming that Ellie would happily take the bottle from my husband as she had in the past. But too much time without the bottle had passed and she suddenly expressed a very strong willed refusal. She would clamp her lips shut so that we couldn’t even get the nipple into her mouth, regardless of the contents of the bottle. I absolutely became a mother screaming, “my baby refuses to take a bottle!” Suddenly, I was part of the club.

Though I read of some mothers who would let their child get hungry enough to finally accept the bottle, I was unwilling to let Ellie fall to that level of hunger so we didn’t attempt that route.

If the refusal of a bottle meant only that I had to be with Ellie for feedings it would have been inconvenient but not too hard to manage. However, my supply continued to suffer with my cycle each month despite the supplements that helped to generally maintain it. Therefore, when I wasn’t able to provide her with full feedings, it was a struggle to keep Ellie nourished and content without the means to supplement with formula or pumped milk. 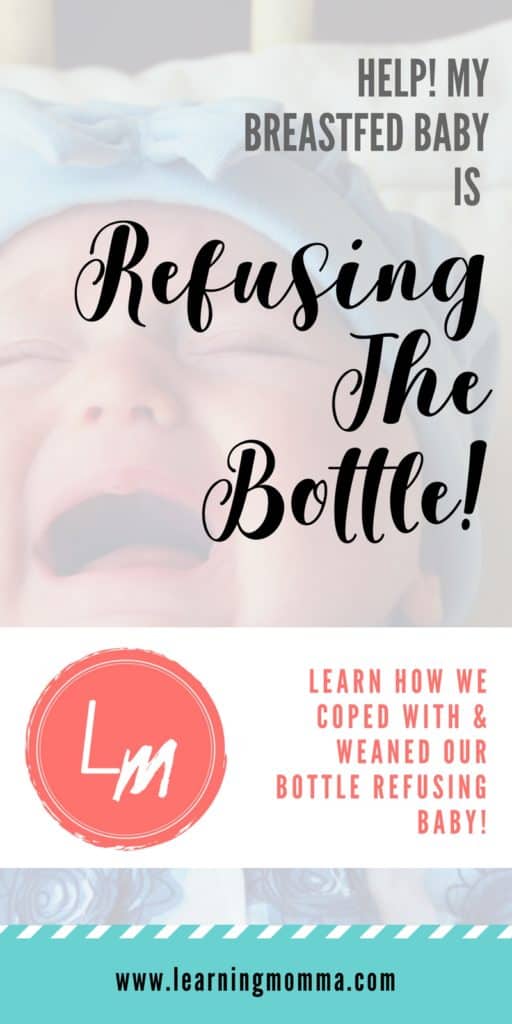 I had to develop a few new tactics for our feeding routine to accommodate the fact that I was now part of the “my baby refuses to take a bottle” club. As much as I love following a set schedule and routine to keep both Ellie’s sanity and mine (you can read more about my thoughts on routine here), I was forced to add more flexibility into her schedule to accommodate for more frequent feedings during periods when my supply was low.

There were days when I felt that all I did was sit at home and nurse, but fortunately the sacrifice kept Ellie nourished and protected most of the progress we had made on her nighttime sleep duration.

Ellie’s bottle refusal made her fussier when my supply was low but was manageable with the more frequent feedings. However, her continued refusal very much complicated the weaning process. I had originally planned to begin weaning Ellie at 6 months old for various reasons including my own emotional and physical health.

Needless to say, her refusal of the bottle threw a wrench into my optimistically crafted plans.

So how did I wean when I was part of the “my baby refuses to take a bottle” club?

First of all, we were not able to wean right at the 6 month mark according to my original plan – but we got pretty close in the end. Since I had been hoping to wean at 6 months and Ellie was still refusing the bottle at that point I began to try other feeding options, primarily sippy cups.

We tried Munchkin Miracle 360 Trainer Cups, NUK learner Cups, and Munchkin Flexi-Transition Trainer Cups hoping that a spout that didn’t feel like a fake nipple would tempt Ellie to consume the contents. I started by letting her play with the cups to become familiar with them and then began to offer them to her to drink. Maybe it was a mistake to let her play with them first, because instead of trying to drink she would play with the spouts on the cups, biting and pulling them in and out of her mouth.

7 Tips To Get Your Baby Sleeping Through The Night

Increasingly discouraged with each sippy cup that we unsuccessfully tried, I finally came upon some posts from other moms in the “my baby refuses to take a bottle” club discussing the use of straw cups. At least one of them specifically mentioned the Thermos Foogo straw cup.

This cup finally worked for us! 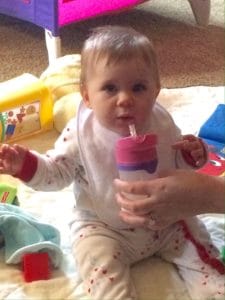 The Foogo cup is a phase 3 cup recommended for children 18 months and older, but our daughter took it at 6 months old when she wouldn’t take any other cups! Here’s why I think this cup finally worked to transition our breastfed daughter:

1. It didn’t have any no-spill feature.

We had to place a towel on our laps when we sat down to offer this cup to Ellie because it was quite messy at first. She would sip up more than she could swallow and end up spitting some back out. However, I think she was able to easily figure out how to use this cup because it required only simple sucking. Because it didn’t have a spill-proof valve like many other straw cups she didn’t have to learn to bite while sipping, making it easy for her to quickly figure out.

With any of the spouted sippy cups that we tried Ellie had to tip them up to be able to effectively drink the milk. Most of the time we were holding the cup to try to get her to drink, but even then the tipping requirement of it made it seem much more similar to drinking from a bottle to her. So whether she was holding the cup or we were trying to help her drink it, the need for a sippy cup to tip was unhelpful.

3. It was an interesting and different way to drink!

I think a big part of why Ellie finally took the straw cup was that it used similar muscle memory to breast or bottle feeding, but it was a very new and interesting (to her) method of drinking. Because it seemed so different, she was less resistant to it as a replacement to breastfeeding and therefore she was much more eager to experience it.

What steps did we take then to finally wean her to the cup?

After Ellie had a little bit of time to work on the process of drinking from the Foogo cup (about 7 months old), I started by replacing one feeding a day with the cup. I replaced her afternoon feeding first. After several weeks of waiting until she seemed to be taking that feeding consistently, I then replaced her late morning feeding with the cup as well. With the schedule we were on at the time, this left just a morning and bedtime breastfeeding. You can read more about Ellie’s 7 month schedule here.

After both the afternoon and morning feedings were transitioned to the cup I continued to replace the remaining feedings with about a week in between. This allowed her time to adjust to the change and my body time to adapt. By about 8 months old we had replaced all of Ellie’s feedings and she was fully weaned!

She remained on the Foogo straw cup for about another month until she randomly started to become very finicky about drinking from it. Curious to see if something else would work at that point, I pulled back out her NUK learner cup with a soft spout and, sure enough, she gulped it down! So from about 9-12 months Ellie primarily drank from the NUK learner cup and I stashed the Foogo cups away for a later age. I believe that after enough time without breastfeeding she was eager to use the soft spout cup and I rolled with her cues and made the change. It was a less messy and easier to manage change in the long run since I could offer the NUK cup to her while in the carseat and it had a spill-proof top that meant we didn’t have to drape ourselves with towels any more. So the Foogo cup allowed us to wean her, and the NUK cup became her long term go-to – AND I was no longer part of the “my baby refuses to take a bottle” club!

Every baby is different but, if you find yourself in the “my baby refuses to take a bottle” club, I hope these tips help. Add your own in the comments for any other struggling mommas! 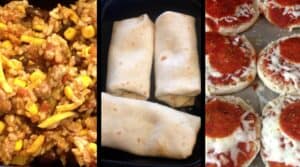