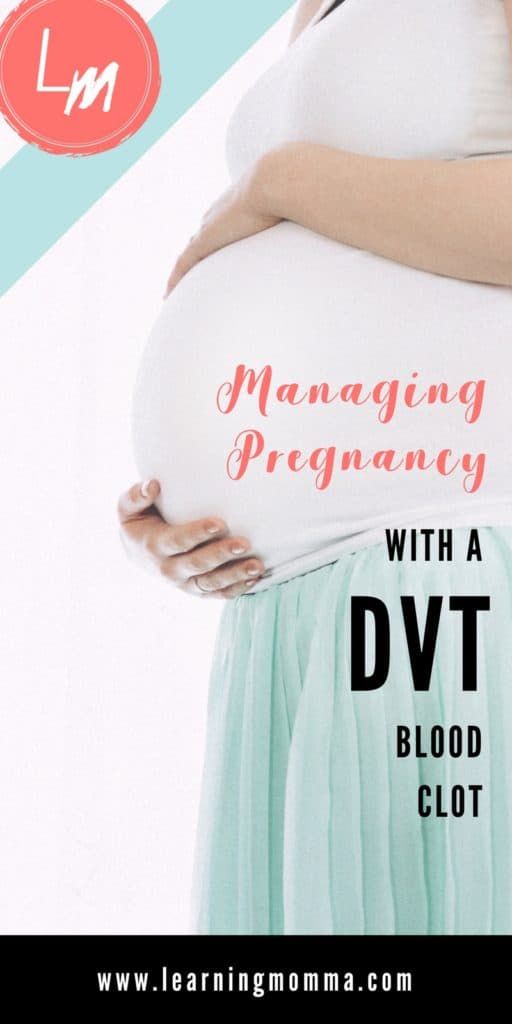 When I found out I was expecting about a month into our marriage, I expected pregnancy to be an experience of growing a tummy while blissfully going about life with my new husband. After all there are nine months before the baby arrives, right?

But I had no idea what was coming.

A few days shy of six weeks into the pregnancy I left work early overwhelmed with nausea. I laid in bed the rest of the day assuming it would pass and eager to get back to life. I knew morning sickness could hit at various times of the day and waited for my wave of it to pass. When the repeated vomiting began just a few days later I hopelessly began to realize that there wasn’t going to be a passing wave. My “morning sickness” was more like a hurricane strength flood that hung around for months on end and left irreparable disaster clean-up in its wake.

I sat on the couch day after day, moving only to vomit or use the bathroom. My husband moved his bed to the couch and I slept elevated in the arm chair with a bowl and an arsenal of home nausea remedies by my side. We made a trip to Urgent Care and attempted Zofran and Diclegis with little relief.

After two weeks of living on the couch I began to develop a sharp pain under my left knee. It felt like a sore muscle, but I couldn’t figure out how it was caused since I had barely moved from the couch for weeks. The pain intensified over a few days time. It became so strong that I could no longer bend my leg straight or put weight on it to zombie walk myself to the bathroom. My instincts knew something serious was wrong. We made a midnight trip to the ER, rolling in with the wheelchair and vomit bowl in tow.

The blood test came back questionable, but an ultrasound confirmed my fear. I had a blood clot in my leg. The prognosis was good and we were assured that the baby would be fine, but the treatment left me terrified and in tears.

Two shots a day for the rest of the pregnancy.

Squeamish to any needles or medical attention, I wanted to shrivel into a shell and hide as the nurse instructed and demonstrated how to take the Lovenox (blood thinner) shots. I winced in pain as it was administered, already barely surviving from the nausea and wondering how I would survive the needles as well. My sweet husband listened attentively and assured me that he would give the shots, but I struggled to see hope as I clutched the vomit bowl and held my stomach in pain.

It was not the first trimester I had planned for.

We moved in with my in-laws a few weeks later so I could be cared for during the day, and my husband faithfully administered the painful shots. One in the morning and one in the evening, until the baby was born. It took me months to no longer fear the shots for hours prior to receiving, and the pain never ceased with each one that I received. But we learned that ice made it more bearable, and that rotating the site spread out the bruising. 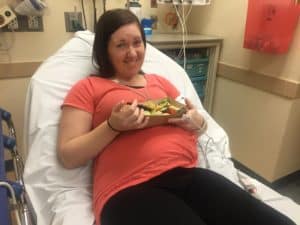 In the ER for a second time after concerns of faintness while on the blood thinner.

With each passing day I prayed that the nausea would end and sat desperately immobile and unable to function in life. Even taking a bath was a seemingly impossible and dreaded task. I wondered if the vomiting would ever subside, until one day it did! Week 16 was the magic week for me when suddenly my body seemed to calm down and the nausea slowly subsided. I still needed Diclegis to keep it at bay, but I was able to function in life again and gradually regain some mobility and independence.

The rest of the pregnancy passed relatively uneventful though trips to the lab for blood work and pharmacy runs for more Lovenox shots became the norm. A month or so before my due date I was switched to Heparin to thin my blood since it didn’t stay in the system quite as long and would therefore be easier to work with if I would happen to go into labor early. The heparin shots were even more painful for me and required very frequent lab work, but fortunately were a short-term arrangement that I only had to deal with until our daughter arrived. I was also still unable to stop taking Diclegis in the third trimester, but as long as I kept taking it at night was able to keep the nausea under control. We were exceedingly thankful that Ellie was healthy and we had made it through the nightmarish first trimester, but we were weary and shaken by the fiery test as we approached her welcome into the world.

The disaster clean-up from the flood of trial would be one over a year in the making as I began the work of regaining my health and energy as well as repaying overwhelming debt from the cost of the Lovenox shots and hospital visits – but God sustained us and, of course, in the end the treasure was worth every piece of the painful journey.

You can read more about my experience with blood thinner during pregnancy in my labor and delivery story here. 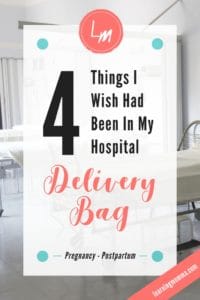 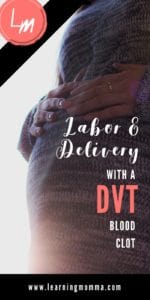